Childhood obesity, a major concern in the Pacific 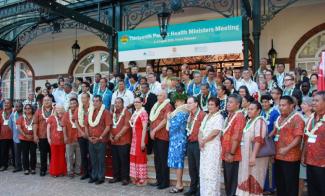 Most behaviours linked to non-communicable diseases (NCDs) begin in early childhood. NCDs, such as diabetes, heart disease, chronic respiratory disease and cancer, are the leading cause (75%) of deaths in Pacific Island countries and territories.

“Childhood obesity is an emerging public health concern across the Pacific, so we need to ensure that we address the issue of NCDs and childhood obesity in a whole of government and whole of society approach”, pointed out Dr Si Thu Win Tin, NCD Team Leader at the Pacific Community (SPC). During the 13th Pacific Health Ministers meeting in Papeete, French Polynesia from 6 to 8 August 2019, the countries recalled their commitment to reducing the number of NCD-related premature deaths.

There are four risk factors behind NCDs, i.e. a lack of exercise, poor diets, smoking, and alcohol abuse. Studies in the region have shown that more than 20% of young people aged 13 to 15 are obese, so childhood obesity is a now of growing concern for the Pacific.

Like all Pacific Island countries, New Caledonia has not been immune to this scourge. According to a study the New Caledonian Health and Social Affairs Agency carried out in 2011-2012, nearly one child out of every six was overweight or obese. These figures are even more alarming as by the age of 9, nearly three children out of every 10 were overweight as were four out of every 10 by the age of 12. “Our problem is that we have always had a very care-focussed approach, but not enough resources are dedicated to prevention,” highlighted Valentine Eurisouké, the member of the New Caledonia Government in charge of coordinating and implementing the Do Kamo (health) Plan and the civic service. “We need to review our strategies for prevention but also for education so as to promote health in schools and strengthen prevention messages in the education system,” she added.

Given the scope of this task and the need to promote and support efforts to put an end to childhood obesity in the region, in 2018 Pacific health leaders approved the establishment of the Pacific ECHO (“Ending Childhood Obesity”) network designed to implement regional childhood-obesity control priorities , which will strengthen the programmes that already exist in country.

The Federated States of Micronesia also have to deal with childhood obesity, one of their major public health concerns. “The latest study that was done in 2015 revealed that obesity in FSM is around 20 to 30% prevalence in children from 2 years to 8 years, that’s a concerning factor,” explained Carter Joe Apaisam of the FSM Department of Health & Social Affairs. Such obesity is due to a wide range of social and environmental factors. As the lifestyles of communities change, they are turning to imported processed foods rather than the healthy traditional foods grown in the islands.

Mr. Apaisam regrets that shops and snack bars can now be found around schools. He believes that in order to effectively fight childhood obesity, policies to restrict the sale of unhealthy food near schools are needed along with efforts to get the education sector involved in adapting the school curriculum  that address physical activity and healthy eating.

While recognising that childhood obesity is a complex issue, efforts must be made to resolve the problem by getting all the stakeholders involved. Everyone in the community - from children to parents and including teachers, businesspeople, civil society and political authorities - must be involved so that each one, at his or her level, can begin taking action to ensure healthy futures for Pacific Island children.