World No Tobacco Day 2016 ‒ Get ready for plain packaging 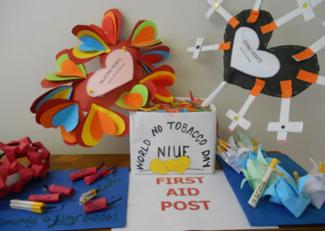 Statement by the Pacific Community Director-General, Dr Colin Tukuitonga: World No Tobacco Day, on 31 May every year, highlights the burden of tobacco and tobacco-related harm.

In Pacific Island countries and territories (PICTs), tobacco use is still a common habit. Between 25% and 75% of adult males, and 20% and 59% of adult females were current smokers according to data available for 14 PICTS from 2001 to 2013. The bad news is that these are among the highest smoking rates in the world.

Data indicate that about half of all smokers will die from smoking, and of these, about half will die prematurely.

The good news is that PICTs recognise the burden and costs of tobacco-related harm and are taking action. Some PICTs are already reaping the benefits.

The Pacific Community (SPC) is working closely with our members and partners, the McCabe Centre for Law and Cancer, United Nations Development Programme, World Bank and World Health Organization (WHO), to assist PICTs with their Tobacco Control programmes. For example, the territory of Wallis and Futuna is today launching a “Tackling Our Addiction” campaign, developed with technical support from SPC. Its aim is to inform smokers about the implications of tobacco use and offer them support to quit the habit.

At the inaugural Joint Economic Forum and Pacific Health Ministers Meeting in 2014, ministers approved the Pacific Non-Communicable Disease (NCD) Roadmap. The Roadmap focuses on controlling tobacco and alcohol, reducing consumption of unhealthy food and drinks, improving the efficiency and impact of existing health budgets and strengthening the evidence base for better investment planning and programme effectiveness.

To strengthen tobacco control, the Roadmap targets a gradual increase in excise duties to 70% of the retail price of cigarettes over the medium term. Since 2014, at least seven PICTs have increased taxes and two have reached the taxation target on their most popular brands of tobacco.

The effectiveness of higher taxes in decreasing smoking is clearly shown by the results of STEPS surveys in two PICTs (STEPS is a standardised method for collecting health data in WHO member countries). In Samoa, the percentage of current smokers fell from 40% in 2002 to 27% in 2013. Similar changes have been seen in Tonga.

In addition to the Roadmap, the ministers also launched the Tobacco Free Pacific 2025 initiative, which aims to achieve a rate of less than 5% adult tobacco use in the region by 2025.

The emphasis on plain packaging will be a welcome addition to current measures such as increased taxes, and bans on smoking in public places and advertising.

At the upcoming Pacific NCD Summit in Tonga, being staged by SPC and the Kingdom of Tonga from 20 to 22 June, Pacific leaders will meet with their partners to present the case for strong, urgent action at the top political level to address the Pacific NCD crisis. The meeting will review current activities in PICTs, how to accelerate progress on implementing the Pacific NCD Roadmap, and creating opportunities for South-South collaboration in implementing good practice for NCD prevention.

Many countries have shown that it is possible to significantly reduce tobacco use and related harm ‒the time is right for PICTs to accelerate and strengthen their tobacco programmes. SPC will be there providing ongoing technical and scientific support, in pursuit of sustainable development to benefit Pacific people.